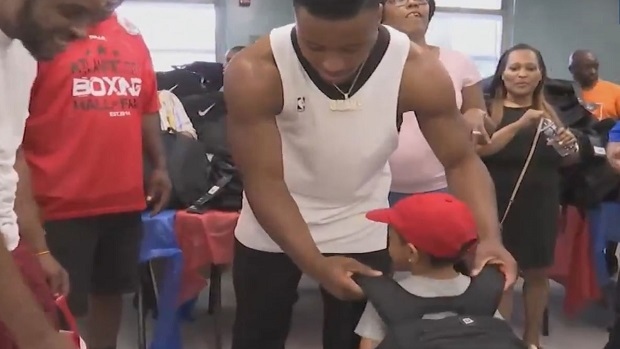 It’s hard to believe that Saquon Barkley is only 22-years-old and it’s not just because he put up 1,307 rushing yards and 11 touchdowns and caught 91 passes for 721 receiving yards and four touchdowns as a rookie last season; it’s also because of how he handles himself off the field.

The Bronx, New York native is heading into his second NFL season and he was back in his hometown on Sunday afternoon helping local kids get prepared for the upcoming school year by handing out free book bags to the neighbourhood children.

#NFL Star @Saquon Barkley heads to #TheBronx to giveaway free book bags to children in the neighborhood where his family is from. @NY1 @Giants @rubendiazjr #BacktoSchool pic.twitter.com/OG9cetG9Vy

Barkley packed the book bags with school supplies to give the children a head start on the school year and it was something that’s clearly greatly appreciated by every child who received one of the bags and got the chance to meet the 2018 NFL Offensive Rookie of the Year.