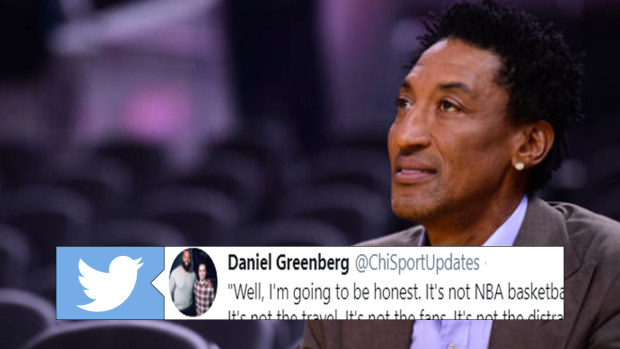 Scottie Pippen knows a lot about winning basketball. As part of the dominant Chicago Bulls in the 90’s, he went through some of the roughest, grittiest basketball in history. When you face a team known as the “Bad Boys of Detroit,” you get that.

So how does Scottie feel about the NBA Bubble, and this very unique NBA postseason? Based on his interview with John Lynch of Business Insider, he seemingly doesn’t respect it as NBA postseason basketball.

Well, I’m going to be honest. It’s not NBA basketball. It’s not the hard grind. It’s not the travel. It’s not the fans. It’s not the distractions. Really, to me, it’s pickup basketball. It’s going to the gym. Yeah, you already got your team. Y’all practicing together. But it’s a more of a pickup type of basketball game, because there’s no fans in the stands. So there is no distraction. There’s no real noise. There’s no pressure on the players, you know. Prime example: I looked at Rondo. Rondo ain’t made three pointers in his whole NBA career. Now, all of a sudden, he’s in a bubble, he’s probably a 50% three point shooter. I haven’t even checked the stats.

But that’s just something that I consider making the game so easy, because Rondo can’t score inside of an arena, when you got depth perception. Like, there’s a whole lot of things that make the NBA hard. The bubble makes the NBA easy to me. There’s no travel. That’s the killer itself. So you’re sleeping in the same bed every night. You’re walking to the gym. You’re not having to go with a 25 to 50 minute bus ride to an arena. You’re not having to probably even sit in the arena for two hours before the game, talk to the media, deal with all the outside stuff that they’re trying to pull you in to make some distraction and, you know, throw the team in a loop. So it’s a different game, but it’s very entertaining.

Calling the NBA playoffs “pickup basketball” is quite a claim, and it’s brought along quite a bit of reaction. Some viewers agree that it’s not a legitimate playoffs, other argue that there are different obstacles that make this year even more difficult.

Pip is right, that's why I feel this season deserves an asterisk

Before the bubble begins “this will be the hardest championship”

Now: “this is pick up basketball”

Honestly I've come to like this distraction free environment. Take all the extras out. Level playing field. It's all about who can ball the hardest. No home court advantage to give you an edge or bail you out. No travel to wear you down. Either you got it or you don't. Simple 🤷🏾‍♂️

Oh is this what we're doing now? lol pic.twitter.com/x5xf7Peomu

So, basketball with zero external factors?