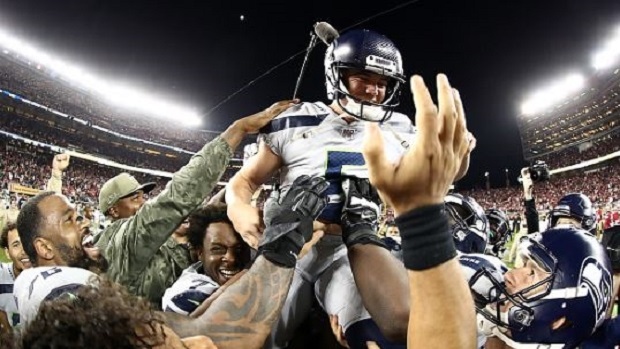 The Seattle Seahawks and the San Francisco 49ers certainly lived up to their hype on Monday night as they put together one of the most entertaining Monday Night Football games of the season.

The undefeated hosts jumped out to a quick 10-0 lead in the opening quarter, but the Seahawks found the end zone before halftime and then two more times to start the second half to take the lead into the fourth quarter.

However, the Niners showed why they’re undefeated on the season and scored 14 points of their own in the final frame, which forced the game into overtime.

In overtime, the Seahawks got a chance to end the game early in the extra quarter, until Russell Wilson threw a rare pick in the red zone to put the game in the Niners’ hands.

The @49ers pick it off and return it across the 50! #GoNiners @DreGreenlaw

San Francisco was able to bring the ball back into Seattle’s territory, and even lined up for the game-winning field goal. Unfortunately for rookie kicker Chase McLaughlin and the Niners, the kick went wide and it gave the Seahawks one more shot to take the win.

This time, they made no mistake.

As a result, the NFC West is now up for grabs as the Seahawks improve to 8-2 and the Niners slide to 8-1.

This is the Seahawks NFL-leading 3rd win after trailing by at least 10 points this season (also did it last week vs the Bucs).

Russell Wilson is now 6-0 in his career against teams that are at least 8 games above .500. pic.twitter.com/dgdcUhBuOL

Goodnight all. Special goodnight to my @Seahawks man.... I’m a wreck.

How great every Seahawks fan is going to sleep tonight after #SEAvsSF pic.twitter.com/hef8dVZUu4

An MLS Cup victory on Sunday and a big division win on Monday. It’s a pretty a good time to be a Seattle sports fan.