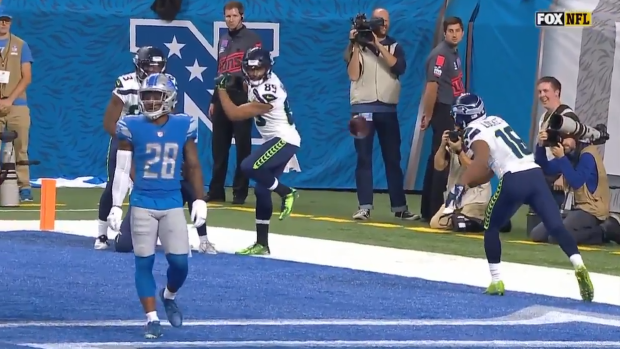 The Seattle Seahawks and Detroit Lions faced off on Sunday from Ford Field in Detroit.

With the Seahawks nursing a 14-7 lead in the second quarter, Seahawks quarterback Russell Wilson found Ed Dickson for a 12-yard touchdown to to extend Seattle's lead by two touchdowns.

Following the catch in the red zone, Tyler Lockett and fellow receivers Doug Baldwin, Jaron Brown choreographed one of the better touchdown celebrations we've seen in quite some time: A good old fashion baseball fight.

October baseball definitely seems to be resonating with football players, even if Lockett and Baldwin were celebrating another player's touchdown.

If the Seattle Mariners need an extra reliever to come out of the bullpen next season, then sign Lockett up.

Last year, the Philadelphia Eagles celebrated one in a similar fashion but excluded the fight portion during the World Series.