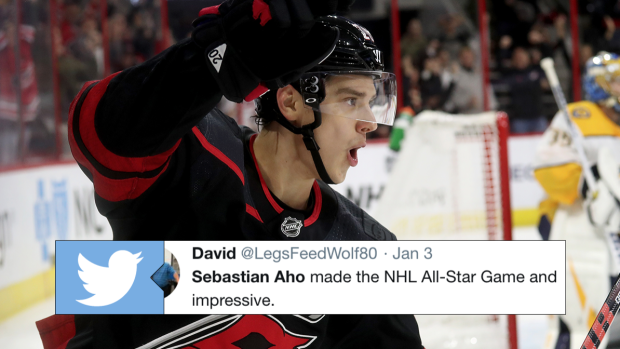 Sunday night, Sebastian Aho of the Carolina Hurricanes continued his incredible season with a hat trick and an assist in a win against the Nashville Predators.

Aho is on pace to shatter his career-highs in goals, assists, and points, and he'll be representing the Hurricanes at the All-Star game later this month in San Jose.  As hockey fans pointed out, Aho will also be in the AHL All-Star game and wait, how is that possible?

How this is possible is there are actually two players named Sebastian Aho and the other plays for Bridgeport in the AHL.

Michael Dal Colle was named to the AHL All-Star Classic yesterday. His thoughts:

“It’s cool. It’s definitely a big honor. A lot of great players have played in that game, so be to named there with Sebastian Aho, it should be a fun experience." #Isles #BST https://t.co/ZckQCyBMWO

The AHL's Aho, who is a defenceman, has 24 points in 34 games and the 22-year-old is clearly developing nicely for the Islanders.