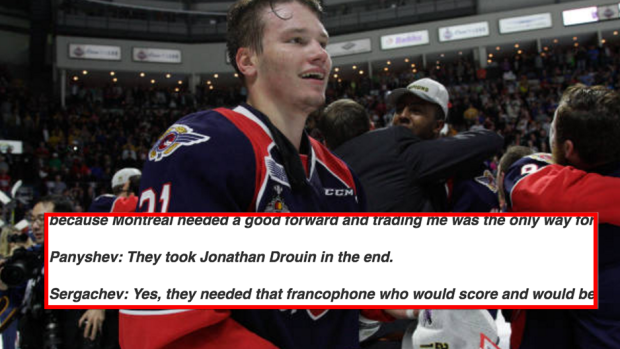 For the second straight offseason, the Montreal Canadiens shocked the hockey world by making a huge trade.

BREAKING: The #Habs have traded Mikhail #Sergachev and a 2018 conditional 2nd-round pick to Tampa for #JonathanDrouin and a conditional 2018 6th-round pick. . Thoughts?

The Habs dealt the 9th overall pick in the 2016 draft, Mikhail Sergachev, to the Lightning for Jonathan Drouin.

The trade caught everyone off guard, including Sergachev who found out in an interesting way.

Should specify the fan texted Sergachev. Cell reception for the D-man in Cyprus is spotty. Some calls/texts come through, some don't.

Recently, Sergachev was interviewed in Russian by Pavel Panyshev of Championat.com and he had some interesting thoughts about the trade that brought him to Tampa.

Pavel Panyshev: What were your first impressions after the trade to Tampa?

Mikhail Sergachev: I didn’t expect it. I wouldn’t say it was hard for me. I was upset for the first five minutes, but then I talked to my parents and they supported me. They saw a new opportunity, a new chance in this. I think I have a good chance to play in Tampa.

Panyshev: You were selected 9th overall in the 2016 NHL Entry Draft. Was it a shock for you that Montreal has parted with one of their leading prospects?

Sergachev: This is business. Being upset or resenting anyone is pointless. You can be traded 15 times during your career. I’ve been traded because Montreal needed a good forward and trading me was the only way for them to get one.

Panyshev: They took Jonathan Drouin in the end.

Sergachev: Yes, they needed that francophone who would score and would be loved by the fans. Besides, he really wanted to play there.

At just 19-years-old, it seems like Sergachev is very mature for his age and understands that at the end of the day, hockey is a business.

The only thing Sergachev is focused on now is making the Lightning and helping them win a Stanley Cup.

#Lightning's hot new defensive prospect, Mikhail Sergachev. His 6 goals during the 3 on 3 tournament in Development Camp lead all scorers. pic.twitter.com/dGNkxbQSHX