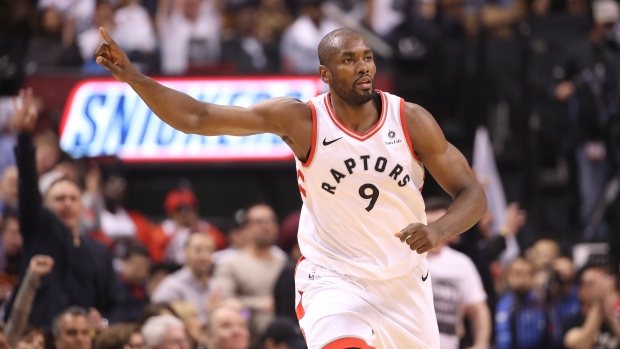 The Toronto Raptors are well-regarded for the diversity of their roster, playing players from seven different countries in Saturday’s Game 1 against the Washington Wizards. Under Nigerian general manager Masai Ujiri, the Raptors have been known to scout well overseas and break down stereotypes of international players.

This is just showing off, though. In his postgame press conference, forward Serge Ibaka answered three consecutive questions in three different languages: English, French and Spanish.

As for how he picked up these languages, a path can actually be traced through his basketball career. Born in the French-speaking Republic of Congo, Ibaka played basketball in the Spanish professional league as a teenager — even being granted citizenship there, allowing him to represent Spain in international play — and now, obviously, his English has developed over his years in the NBA.

That didn’t stop Kyle Lowry from ribbing Ibaka, though. After his joint postgame press conference with DeMar DeRozan concluded, Lowry introduced Ibaka to the podium as “the most stylish man in the NBA.” His last playful jab at his teammate, though, was the most ironic: “He don’t speak good English, so don’t ask him too many questions.”

Looks like Ibaka, now the NBA’s most prominent linguistic triple threat, got the last laugh there.

#KyleLowry hyping up #SergeIbaka and his outfit after the game 😂 . (🎥: @nbaontnt)

After a regular season that saw many of his stats decline from the previous year, Ibaka showed out in Game 1, scoring a game-high 23 points to go with 12 rebounds in the win.