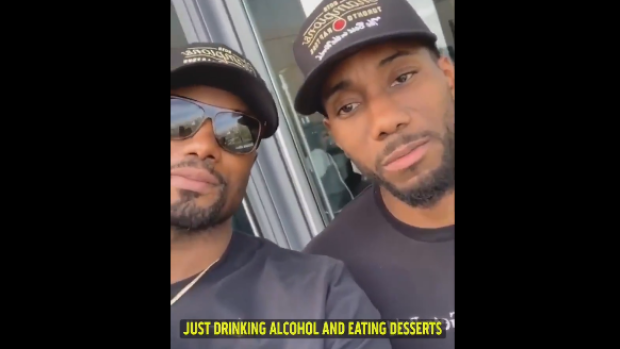 Summer mode has officially been activated for the Toronto Raptors.

After taking down the juggernaut and injury-riddled Golden State Warriors in 6 games, the Raps got to let loose at the celebration parade in front of millions of Raptors fans in downtown Toronto on Monday.

Various Raptors players broadcasted and shared the parade from their angle on their Instagram stories, catching exchanges with their teammates and capturing the moments so the entire world could see.

Serge Ibaka was uploading to his story throughout the day, but waited until Tuesday to post his best content.

A special post-NBA Championship and parade edition of "How Hungry Are You?" If you're unfamiliar with his YouTube series, the Raps big man brings his teammates over to his condo and cooks up peculiar dishes.

With the season now officially over, the Raps don't have to strict to their strict fitness regiments (at least for a few weeks), meaning they can indulge on junk food. What kinds of treats? Well, Serge asked Pascal Siakam, Kyle Lowry, Danny Green, Kawhi Leonard, Fred VanVleet and Norman Powell were all asked, and some of their answers were absolutely priceless.

@sergeibaka asked the Raps just how hungry they are following their NBA Championship and what type of junk food they’ll be eating now. 😂

Fun guy Kawhi is ready to muck some desserts and drink this summer, apparently.

How Hungry Are You, Kawhi?

Fun guy Kawhi is ready to drink alcohol and eat lots of desserts. 🥂🍫🍦🍰

Who's food choice did you like the most? Let us know in the comments!