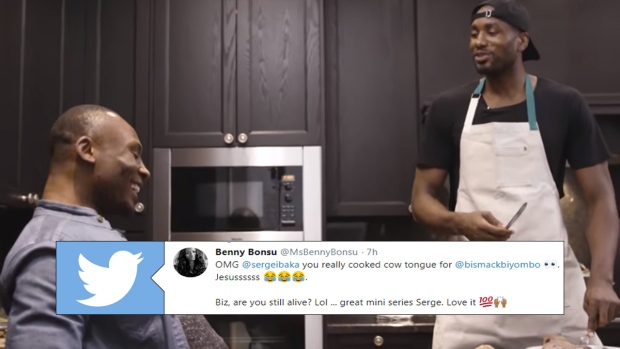 Serge Ibaka was acquired from the Orlando Magic by the Toronto Raptors last February and seemed to really enjoy his time in Toronto as he went on to sign a three-year, $65 million contract at the end of the season.

During his brief stint with the Magic that only lasted 56 games, Ibaka formed a friendship with Bismack Biyombo, who also hails from the Democratic Republic of Congo. While the two no longer call each other teammates, they still call each other friends, which is why Ibaka had the Magic centre as his first special guest on his new web series “How Hungry Are You?”

In the premier episode of the series, Ibaka, also known as the Mafuzzy Chef, stops by Sanagan’s Meat Locker in Kensington Market where he purchases a cow’s tongue to make for his fellow NBA player.

The first episode of the series was full of jokes, but in the end Ibaka still managed to get Biyombo to eat the cow’s tongue. He didn’t exactly like it as he voiced his opinion throughout the episode, but he showed some trust in Ibaka as he still tried the meal.