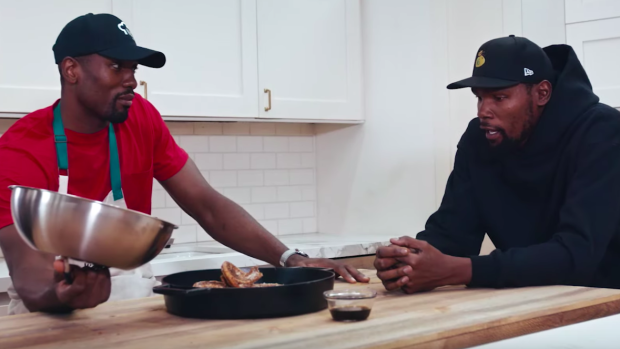 When Kevin Durant hopped on Serge Ibaka’s cooking show, “How Hungry Are You?,” Mafuzzy Chef is... making the implication that he’s a snake? At least in jest. It’s all in good fun between the two, who were teammates with the Thunder, and KD is pretty open on a number of topics that Ibaka asks him before the main dish is served.

Snakes usually don’t eat snakes, but Ibaka put Durant on the spot by preparing a fried snake. To be precise, a black mamba. Ibaka toooootally knew what he was doing here. He unveils the dish at 20:35.

Durant goes for it! We definitely respect it.

This is much better than Kyle Lowry’s gag reflex after trying a bull testicle Philly cheesesteak made by Ibaka earlier this year (around the 11:30 mark).