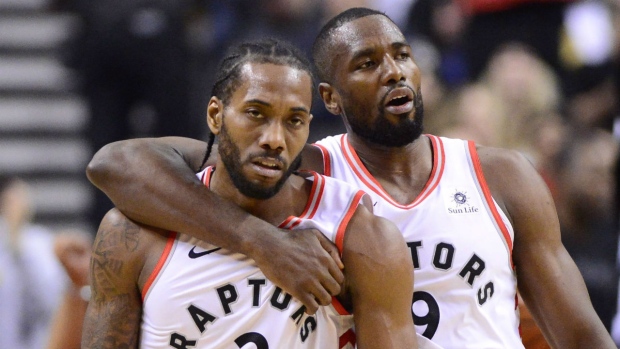 This is most definitely not the news Raptors fans were looking for or even expected but the Mafuzzy chef is heading to Los Angeles.

He played a few mindgames with fans on Twitter when he posted this photo, however, Raps fans were still pretty optimistic that it was just Ibaka having a bit of fun.

Little did they know... he was actually going... somewhere else.

On my way to... pic.twitter.com/fNVpzmQhTQ

Free-agent big man Serge Ibaka has agreed to a deal and plans on signing a 2-year $19M deal with the Los Angeles Clippers, per Woj.

Deal will include a player option in the second year, per source. https://t.co/8laEdy5KmO

The Raptors lost Kawhi to the Clippers last year, and this year Serge Ibaka reunites with his former teammate.

You can hear the breaking hearts of Raptors fans echoing through Toronto.

Serge’s Raptors tenure got off to a rocky start but it was really cool to see him open up to his teammates and the fans, while embracing and growing in his role over the years. They don’t win the championship without his sacrifice and contribution. Cheers, Mafuzzy Chef. pic.twitter.com/yFWEuEAf67

Either way it went, he was always going to be remembered well in this city. An ambassador for the so much more than 🏀. @sergeibaka 🌍 🇨🇩. pic.twitter.com/BowVHGv9gq

I actually think this one hurts more. Serge was a heart and soul player. Yea Kawhi is good, but Serge was a blue collar guy. The type of guy that Toronto sports fans love. This one stings.

Losing Serge hits hard. Raptors have glaring hole inside. We will miss his shot blocking and outside shooting #WeTheNorth