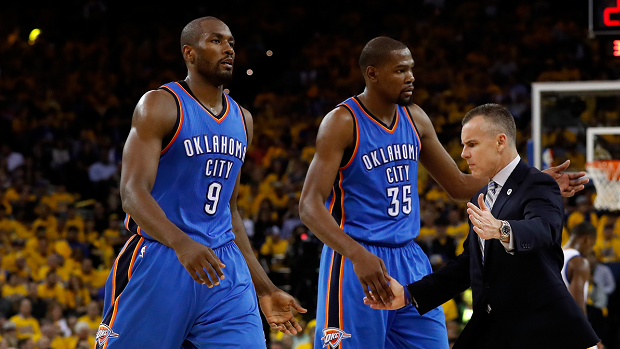 Serge Ibaka played in Oklahoma City for seven and a half years with the Thunder, all of them with Kevin Durant.

He was traded by the Thunder the season before Durant joined the Warriors, but still, he is a part of what Kevin Durant was caught tweeting about the other day. In all, Durant basically said that with Billy Donovan as head coach and the team’s surrounding cast, they weren’t going to win.

Yesterday, Durant admitted that the Tweets weren’t any kind of hack or misclick, but were just an error in judgement from the Finals MVP. That seemed to catch Ibaka’s attention.

Ibaka re-upped with the Raptors this season, signing a three-year deal with the team and they are hoping to make another run at the NBA Finals. They might be playing with a chip on their shoulder this year as well.

DeMar DeRozan already tweeted about feeling slighted by Sports Illustrated in their NBA player rankings and now this.

Two of the Raptors’ biggest stars will have something to prove this season and there’s only one way to do that – taking the next step. The Raptors have lost to LeBron James and the Cleveland Cavaliers two years in a row and the only way they’re going to be seen any different in the basketball world is if they can advance themselves further into the post season.

If they’re able to do that, there’s no doubt that DeRozan will get some more praise in the NBA community and Ibaka will prove he can be a championship piece.

#DemarDerozan had a message for #SportsIllustrated after being ranked #36 on their Top 100 Players of 2018. What should his ranking be? 🤔