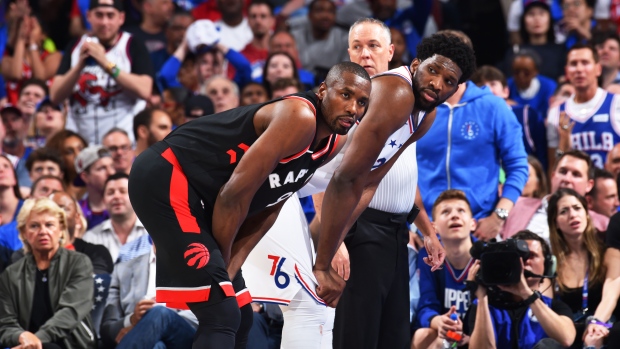 It wasn’t a good one for the Toronto Raptors in Game 3, as they were thoroughly dismantled by the Philadelphia 76ers to the tune of a 116-95 defeat.

How bad was it? Even some of the Raptors’ former teammates are emerging from the woodwork to talk smack. Kendrick Perkins, who formed a starting frontline with a young Serge Ibaka on the Oklahoma City Thunder, expressed his disappointment with Ibaka’s play, especially on defense.

This can’t be the same Serge that I raised defensively!!!! Come on Serge! Get your mind in the game! Jesus Christ!

During his time, Perk was a notable enforcer around the league, and learned a few lessons from an all-timer in Kevin Garnett that he eventually imparted upon Ibaka. In his heyday with the Thunder, Ibaka was one of the league’s premier shot-blockers, leading the league in swats twice and earning three All-Defensive nods.

Age takes its toll — you can’t be a high-flying 24 year old forever — but Ibaka averaged merely 1.4 blocks this season, and he wasn’t much of an interior presence against Joel Embiid (33 points) or the 76ers in Game 3.

Perk deals in the game of constructive criticism, however. He has a suggestion for the Raptors’ film study tomorrow that doesn’t sound half-bad to us either.

If I’m Nick Nurse I would Start off film in the morning by showing Joel windmill dunk and would rewind it 15 times and then ask any comments?