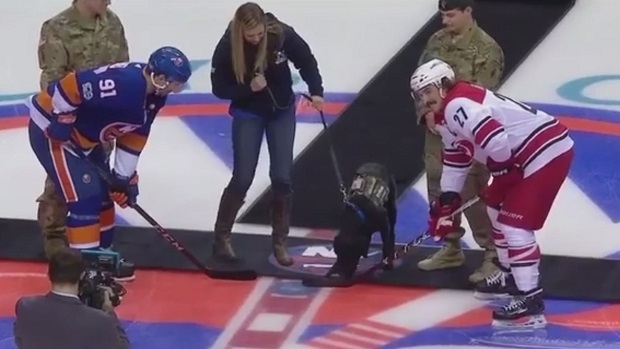 Plenty of service men and women were in attendance for the New York Islanders’ annual Military Appreciation Night on Thursday for the Isles’ tilt with the Carolina Hurricanes and they were treated to quite the night.

Ahead of the pre-game warm-ups, the service men and women in attendance for the game lined up and welcomed the Islanders to the ice, who were rocking some special camouflage jerseys for the warm-ups.

Honored to have members of the military at tonight's game. #Isles #MilitaryAppreciation pic.twitter.com/JB5BKcgOHl

The team and the fans honoured war veterans and current armed service members with a moment of silence before the game.

A moment of silence tonight to honor war veterans & current armed service members and to remember the soldiers who have made the ultimate sacrifice. #MilitaryAppreciation #Isles pic.twitter.com/nTPbpRbyVG

Following the moment of silence John Tavares and Justin Faulk met at centre ice for the ceremonial face-off, where the puck was dropped by Charlie, a black lab in training with America’s VetDogs.

‪Good boy, Charlie! 🐶 ‪Charlie is a black lab in training with @AmericasVetDogs to be paired up with one of our country’s heroes. ‪He was joined by members of the U.S. Army Special Forces group out of Fort Bragg to drop the ceremonial puck tonight!

Charlie was joined by members of the U.S. Army Special Forces group out of Fort Bragg, North Carolina, and he did a great job with the ceremonial puck drop.

Check out our Puppy with a Purpose Charlie drop the puck at the @ny_islanders Military Appreciation Night! What a pro! Thank you to the @ny_islanders for having us tonight and for choosing us to partner with for the 2018 “Pucks and Paws” calendar on sale TODAY! Did you get yours yet? A portion of the proceeds will be donated to our mission to serve veterans with disabilities! #missionvetdogs #puppywithapurpose #todaypuppy

The Islanders made sure to make the rest of the night enjoyable for everyone in attendance as they went on to win 6-4.