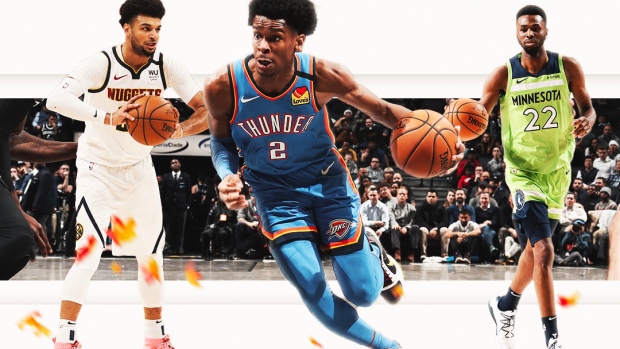 On December 20th, Shai Gilgeous-Alexander scored a career-high 32 points against the Phoenix Suns. In his next game, he did it again to tie his career-high against the Los Angeles Clippers. Then, a week later, he dropped another 32-piece in front of friends and family who made the trip over from Hamilton to see him play against the Toronto Raptors.

His string of strong performances has the Oklahoma City Thunder — who were supposed to be rebuilding this year! — streaking into the playoffs, and it also has Shai in the top spot of our Canadian power rankings for the first time to begin 2020.

Keeping Up With The Canadians is presented by @McDonaldsCanada. pic.twitter.com/2bvBNkAc9L

Elsewhere across the rankings, Andrew Wiggins slips to the three-spot after displacing Jamal Murray at No. 1 in our last rankings. He's still averaging a career-high 24.1 points for the season, but as always, it’s hard to tell how much of his impact goes towards winning and the Minnesota Timberwolves endured an 11-game losing streak in December.

Still, the top-three of Shai, Murray and Wiggins seems to remain a tier of its own right now, and Dillon Brooks holds steady at No. 4 despite coming on strong in recent weeks. He’s averaging 20.8 points and 3.6 threes in his last five, four of them wins for the Memphis Grizzlies. His teammate, rookie Brandon Clarke, quietly remains one of the most efficient finishers in the league.

Keeping Up With The Canadians is presented by @McDonaldsCanada. pic.twitter.com/iUITb6K0fX