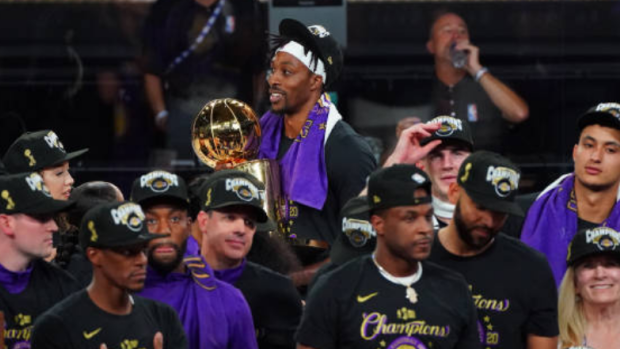 Shaq is a Los Angeles Lakers legend. He commanded respect in the paint on his way to becoming one of the most dominant big men to ever lace ‘em up, and helped the gold and purple to three Championships alongside Kobe Bryant.

The Lakers have once again returned to glory, but with a very different cast of players. One of those players is veteran big man Dwight Howard.

While Howard used to be a very prominent force in the NBA, he settled into more of a role player situation in Los Angeles. In the NBA Finals, he maxed out at 17 minutes and 6 points, while in the Championship-clinching Game 6 he was on the floor for a total of one minute.

In Shaq’s opinion, Howard has been doing a little too much showboating.

"Post one pic and sit yo ass down...Shut yo ass up. You ain’t do nothing." pic.twitter.com/y7PKUqOqfq

This is… let’s just say… not the most surprising take from Shaq. He has had a long-standing beef with Howard, some of which has been awfully entertaining.

Do you agree with Shaq? Let us know @BarDown!