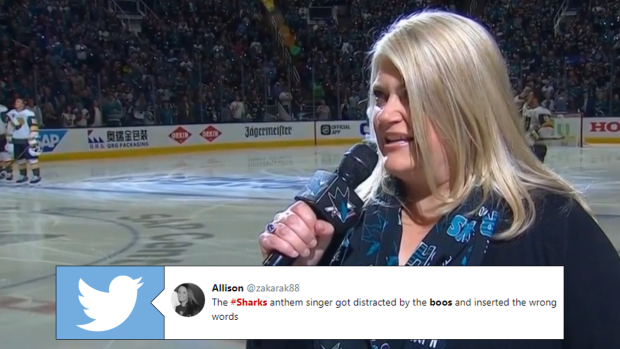 Singing a national anthem in front of 20,000 people has got to be pretty nerve racking. Not only are you the only person in the arena making noise, but the song your singing represents the country of most people standing with their hats over their hearts. While crowds may be able to overlook a missed note or two, you better not mess up the words so carefully crafted to represent a nation.

We’re going to give the poor San Jose Sharks anthem singer a break on her flub, however. Everything was going fine right up until she reached the word “night” when suddenly the whole crowd abruptly booed for about one second. This is not a shot at her voice, it’s a shot at the Vegas Golden “Knights”, who are doing battle with the Sharks in round two of the Stanley Cup Playoffs. Startled by the apparent and extremely sudden displeasure, the singer accidentally messes up the next line, singing “out sword was still there” as opposed to “our flag was still there”

@sanjosesharks crowd abruptly boos when anthem reaches the word "night" (or "Knight"), leading singer to mess up next line . (via @nhlonnbcsports broadcast)

Hockey audiences have taken to clever word play in songs played in-arena. If you’re in Detroit watching a Red Wings game and you hear Don’t Stop Believing by Journey come on, you better be prepared to shout “born and raised in South Detroit” at the top of your lungs. Meanwhile in Winnipeg, “true north” always causes quite the ruckus during the Canadian anthem, and in Nashville you can bet the audience will try their best to influence goal review decisions with a full-crowd rendition of “Let It Be” by The Beatles.

@predsnhl fans started singing #TheBeatles “Let It Be” with their cellphone lights turned on after the @buffalosabres challenged a goal for goaltender interference. . #Preds #Smashville #Nashville #Sabres . (🎥Via Fox Sports Tennessee)

Whether the Sharks have started a new trend will remain to be seen, but if the Knights end up advancing and play Winnipeg in the Conference Finals fans aren’t going to have a voice left by the time both anthems are through.