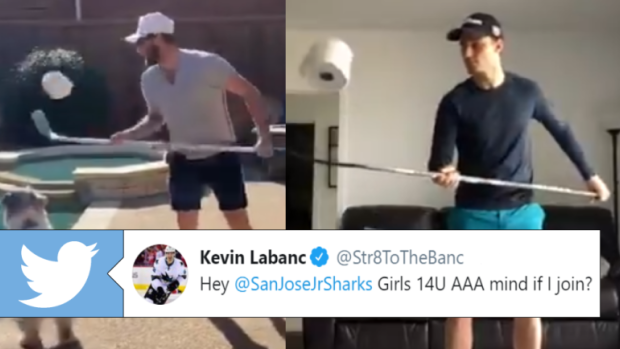 By now, most hockey fans would have seen the toilet paper pass trend that has infiltrated hockey feeds everywhere. If you go back to the very beginning, it was the Junior Sharks credited with kicking off this trend.

In an effort to close social distancing using social media, the girls showed various tricks and styles as the batted, kicked, and… hipped (?) the roll of toilet paper from one side of the screen to the other.

Not wanting to miss out on the fun, it didn’t take long for Sharks players Kevin Labanc and Stefan Noesen to get involved.

Hey ladies, got room for one more? 🤔@SanJoseJrSharks Girls 14U AAA pic.twitter.com/kKHgtnUmwF

Hey @SanJoseJrSharks Girls 14U AAA mind if I join? pic.twitter.com/leth8WbYhq

The Sharks players surprised the girls with their cameos, and ABC News actually caught the moment.

When our @SanJoseJrSharks Girls 14U AAA found a way to be connected and sharpen up on their skills, they weren't the only ones who were inspired.@stefannoesen and @Str8ToTheBanc wanted to join in on the fun too.