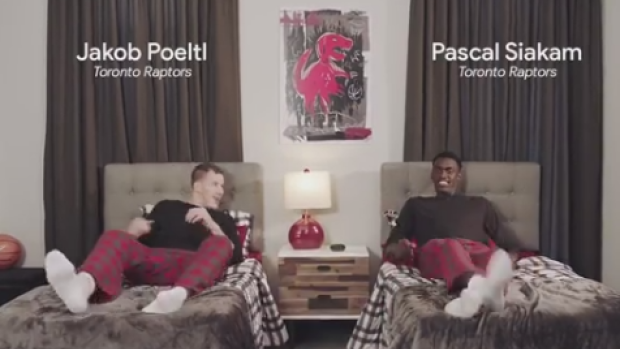 DeMar DeRozan and Kyle Lowry may be the Toronto Raptors' number one bromance, but Pascal Siakam and Jakob Poeltl are slowly developing a hilarious relationship of their own.

By now you've likely seen any number of the Google commercials starring members of the Raptors squad, including the ones featuring both Siakam and Poeltl as a quirky duo who can't seem to agree on anything. Thursday, Siakam posted a new video of the pair pestering Google with a new task...playing an episode of their favourite show.

@netflix binges with @pskills43. Thanks to Google Home, I don’t have to lift a finger to watch the next episode of @gilmoregirls #ad

There's a reason the Gilmore Girls lasted seven seasons on television and was eventually rebooted on Netflix. It's a total tear jerker. Looks like Siakam and Poeltl have more of a sensitive side. Friday, Siakam will appear alongside Delon Wright and Fred Van Fleet in the latest Cabbie Presents. Talking about playing with a chip on their shoulder, and playing the role of underdog on the Raps team, and even in high school.

Siakam, you don't "kinda have a personality." You totally do, as shown by your interest in watching the Gilmore Girls and in how you reacted to getting scared in a haunted house in this unforgettable video from last Halloween.