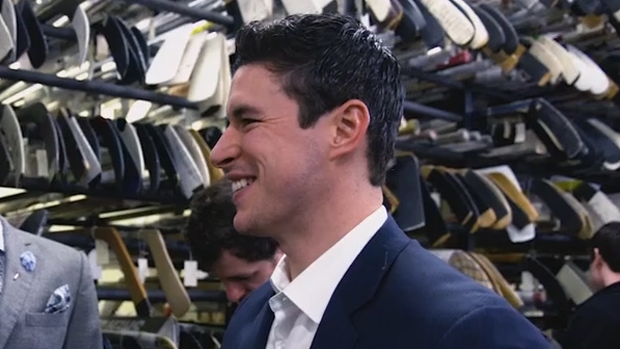 At BarDown we’re massive fans of gear in every sport, but we have a special appreciation for hockey equipment.

That might be one of the few things we have in common with Sidney Crosby because he appears to be a massive fan of sticks as well. The Pittsburgh Penguins had a special tour of the Hockey Hall of Fame after their ring ceremony for their second straight Stanley Cup and Crosby looked like he was  a kid in a candy store.

He’s always shown a great appreciation for hockey history, but seeing the sticks that Wayne Gretzky and Maurice Richard used, he seemed to be extra excited.

That aluminum Gretzky stick is one of our favourite sticks of all time, but holding one that Gretzky actually used would be totally surreal. Shoutout to the Penguins for capturing this moment, because it’s always cool to see players interacting with things that any fan may have a similar reaction.

The Penguins are filled with loaded with HOF-quality players and they put out some HOF-quality content.

With all the personality on their team, they’re able to capture great moments like this all the time. This week they already released a video in which they had Sidney Crosby race Evgeni Malkin on a Zamboni. And of course, there’s Phil Kessel.

The video above was from Episode 3 of their In The Room series, which Phil Kessel has been a star in throughout the year.