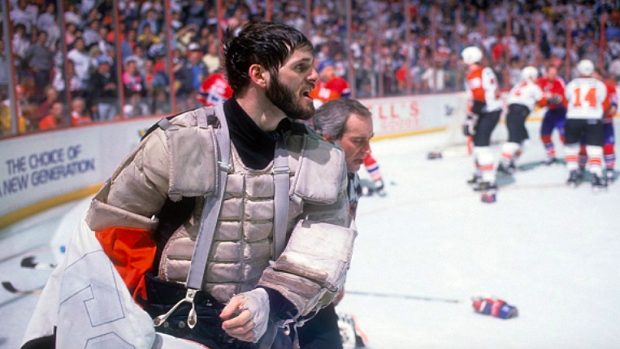 There are certain players who are more disciplined than others when it comes to taking penalties, but there are also certain players who love to play the agitator role and don’t mind taking a penalty or two in an attempt to try to get in their opponent’s head.

While most people think of an enforcer or a stay at home defenceman when it comes to the latter, sometimes it’s the person between the pipes who’s playing that role.

Sean Burke spent time with nine different teams over his 18-year NHL career, so he had plenty of time to make rivals all over the league. In his 820 games, Burke received 310 penalty minutes, with his highest yearly total coming in his second season when he picked up 54 penalty minutes in 62 games.

If Ed Belfour’s career started a few years earlier he’d probably be higher up on this list. However, he’s still fourth all time for most penalty minutes by a goalie as The Eagle earned 380 penalty minutes over 17 NHL seasons. In 1993-94, Belfour received 61 penalty minutes in 70 starts.

The top two on the list are no surprise and they played less games than the rest of the goalies on this list. At number two it’s New York Islanders legend Billy Smith. In 679 games, Smith received 475 penalty minutes. Surprisingly, he never hit the 50 PIM mark in a season.

You probably knew this one before you opened the story. Ron Hextall is the NHL’s all-time penalty minutes leader when it comes to goalies and it’s a record that will probably last forever. In 608 games over 13 seasons, Hextall picked up 569 penalty minutes and finished in triple digits in two of those seasons. As a rookie, the 6th round pick won the Vezina Trophy, the Conn Smythe Trophy and received 89 penalty minutes. His sophomore season he topped his rookie total by picking up 104 penalty minutes in 62 games, and then topped that the following year with 113 penalty minutes in 64 games.