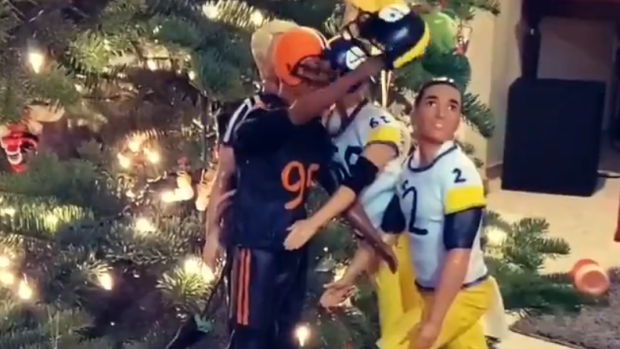 The NFL beef of the year has to go to Myles Garrett and Mason Rudolph, right? Ever since Garrett swung Rudolph’s own helmet at his head, we haven’t been able to stop thinking about it.

And now, the moment will be immortalized in Christmas tree topper form. A Twitter user by the name of Steve Schneider posted this video, which features a moving Garrett figure that swings a helmet at Rudolph.

Apparently, Schneider isn’t even a Browns fan, or for that matter, a Steelers one. He’s actually a fan of the Seattle Seahawks, who found the Garrett-Rudolph brawl as ridiculous as we did.

Lol, I just find it bizarre how every seems to assume we are browns fans. We are Seahawks fans. We live outside of Seattle. And this isn't celebratory, it's mocking the grown men that got in a brawl on national tv.

We won't see Myles Garrett until next season due to the suspension he received for this particular incident, although the Browns have little left to play for this season anyway. Rudolph, meanwhile, has been benched in favour for Duck Hodges, who led the Steelers to a win over the Browns in their Week 13 rematch.