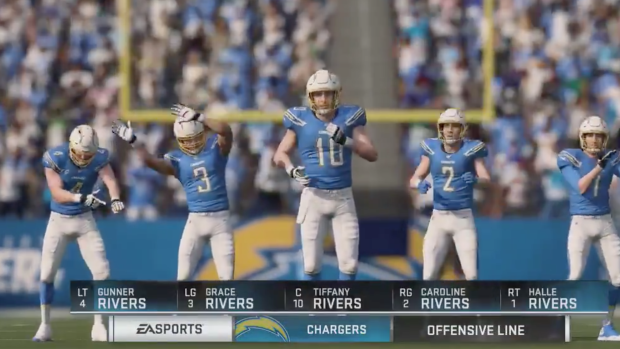 Entering his 16th season (14th as a starter) in the NFL, Philip Rivers isn't showing signs of slowing down. The 37-year-old has as good a chance he's had in his career of winning a Super Bowl thanks to a loaded Chargers roster.

He also has had a busy offseason with the birth of his 9th child back in March, coupled with training camp ahead of the upcoming season.  The Rivers family totals 11 now, the exact number of players needed for an NFL offence and someone actually made an offence fitting that bill in Madden.

They really made a Madden team with Philip Rivers and all of his kids 😂 (via @Maddenschool)pic.twitter.com/8ZRvfyeYk6

Congratulations to Philip Rivers! #Madden20 is the first year we can field an entire offense using just his wife and kids. pic.twitter.com/groeM1oeN4

Halle, who was born in 2002, is Rivers' oldest child and Anna is the youngest.

Also, very nice touch by whoever made this team in Madden having the numbers correspond with the order in which the children were born.