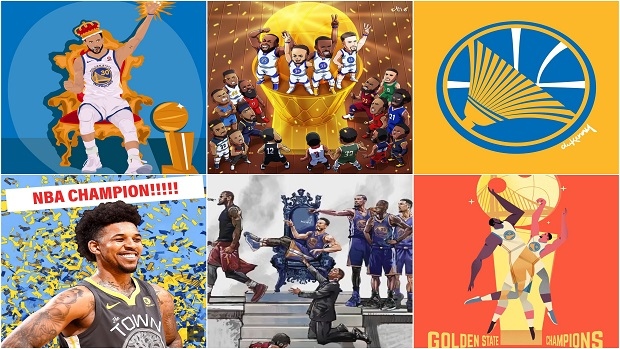 The Golden State Warriors have become NBA champions yet again, and this time, they did it in a sweep after a tidy 108-85 victory over the Cleveland Cavaliers in Game 4. Even for the repeat champions, who have now won it all in three of the last four seasons, that marks new ground.

Kevin Durant was named Finals MVP, after finishing with 20 points and a triple-double in Game 4; his dagger three-pointer in Game 3 capped a pivotal 43-point performance. Meanwhile, after yet another successful season, Curry has now obtained championships in three of his nine seasons in the NBA.

Players, fans and more around the NBA were showing love for Durant, Curry and the rest of the new-again champs:

The Golden State #Warriors complete the sweep to capture their second straight NBA title and third in four years!

Steph Curry and the Warriors are crowned NBA champions for the second straight year! pic.twitter.com/5PmEdR3fYV

Dray did some redecorating.

The @Warriors are NBA champions for the second straight year! #JayAndDan pic.twitter.com/NiNJBVS7Nj

So happy for the Warriors & @SteveKerr. What a run. Congrats! 🏆🏆🏆 #BayAreaUnite

See y'all next season. pic.twitter.com/yHM5kwnY1a

The Warriors knock the King off his throne once again.

Congratulations to the 2017-18 NBA Champions the Golden State Warriors.

The Warriors are NBA champions once again!

The Warriors broke out the brooms.

Congrats to Golden State.. We witnessing one of the greatest Dynasties ever

Congrats to a legit pro my guy, @andre and @SteveKerr. It’s a amazing blessing and accomplish it 3/4 xs has to be amazing