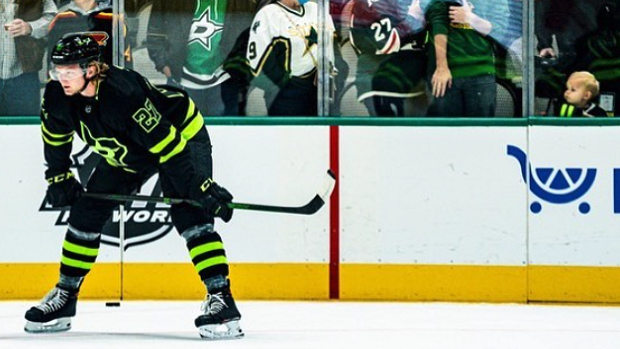 The Dallas Stars selected Riley Tufte with the 25th overall pick in the 2016 NHL Entry Draft and after spending the past two seasons in the AHL he finally got the call to the show this season.

On Thursday, Tufte was set to play his very first NHL game in his home state of Minneapolis and spoke about how excited he was for the night earlier in the day.

Rick Bowness confirms that Riley Tufte was a healthy scratch tonight. Details behind that decision coming momentarily in The Athletic https://t.co/Y61dfTjeZl

The team even used Tufte in a graphic to help promote Thursday night’s game with a quote about how it’s a childhood dream come true to play in Minnesota.

"It's something you always dreamed about when you were a little kid... Being able to play here tonight is a dream come true."

Well, shortly after the pre-game warm-ups things changed and the Stars coaching staff decided to make Tufte a healthy scratch.

Bummer, but I’m hearing Riley Tufte is suddenly scratched for Dallas. Not playing in his hometown

Riley Tufte is a scratch tonight. He went through warmup, so it appears this is a coach's decision and he is a healthy scratch.

Rick Bowness said as of this morning, Riley Tufte was in the lineup but that changed when they got to the rink tonight and discovered some game-time decisions were good to go.

"He’ll be back in there the next time we come in to Minnesota at some point; he’ll play here."

Tufte apparently spent a lot of money on tickets to the game with the help of Wild forward and friend Nick Bjugstad, but the special moment was put on hold, and Stars fans were not pleased. Especially since the team went on to get crushed, 7-2.

that BUSINESS is now called KARMA
note to add: Riley Tufte is 27, coincidence? I think not. https://t.co/SUW3EeQklI pic.twitter.com/0UKUJ2UxiH

Scratching Riley Tufte after warmups before his first game in his home state is such a shitty move. Also, Jake Oettinger should have started the game (nothing against Dobby). It’s about that time to switch things up behind the bench. #TexasHockey

goodnight to Riley Tufte. I hope you can play in your hometown under our next coach — you deserved so much better tonight.

The continuing side story of Riley Tufte spending $$$ on tickets for his friends and family only to be scratched minutes before the game starts is enraging.
I'm expecting a great excuse from Bowness. #TexasHockey

Riley Tufte's family came to watch him play. He got scratched. And they have to watch this absolute embarrassment of a game knowing the coaching staff thought he wasn't good enough to be in the lineup tonight. Disrespectful af.#TexasHockey

Riley Tufte indeed a healthy scratch after breaking the bank for tix for his family https://t.co/BJQUf9h9CL

If that’s how long it takes Bowness to evaluate a rookie… idk what to say.

I think this is the moment that Rick Bowness just completely lost the fanbase once and for all. https://t.co/sBEVZMRxBI

Tufte was drafted back in 2016 but committed to the University of Minnesota-Duluth, where he scored 34 goals and 64 points in 121 games over three seasons.