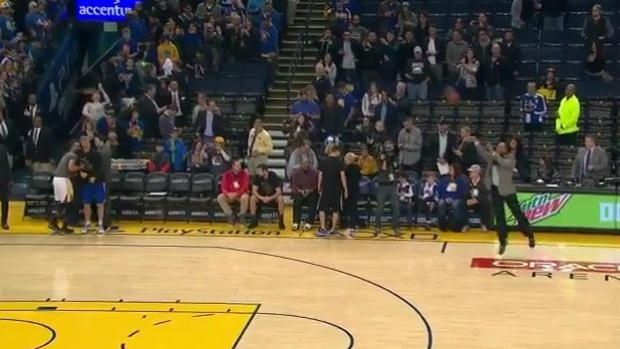 The Golden State Warriors hosted the Charlotte Hornets on Wednesday night. Usually a game between the Hornets and Warriors would mean absolutely nothing during the season, but it’s a big deal for the Curry family.

Former NBA player and father of Steph Curry, Dell, currently works as a colour commentator on Charlotte Hornets television broadcasts. With both Dell and Steph having pretty hectic schedules during the year, they don’t get to see each other as much as they like, so when the two teams meet up they tend to have a little bit of fun.

There were reports that Steph was going to miss the game on Wednesday night with flu-like symptoms, but as it got closer to game time he started feeling a little better and it’s safe to say he was back to 100% health by the pre-game warm-ups. During that time, Steph tried to have some fun at his father’s expense, only Dell ended up getting the last laugh.

It's been that kind of night for the Currys... pic.twitter.com/o2QkSaRaEy

Here’s another look at the hilarious family moment from courtside.

Take that, son! 😂 Dell Curry shows Steph not to play around.

Dell literally responded in the most Curry-esque way possible. It really doesn’t get any better than that.