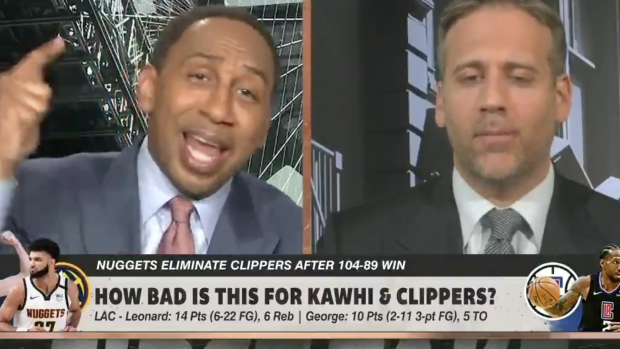 On Wednesday morning, Stephen A. Smith sent out a warning tweet after the Denver Nuggets shocked everyone with a 3-1 comeback against the largely favored LA Clippers, to win the series and advance in the playoffs sending the power duo, Kawhi Leonard and Paul George home.

I’ve specifically stayed off the grid this morning JUST to save everything ounce of energy I have for @FirstTake . I’ll tell you this though: @maxkellerman has never been in more trouble than he is today. Get your popcorn ready. I’m already out of the control.

That's not what the majority predicted would happen with this series, especially Max Kellerman who has been a Kawhi enthusiast for quite some time now, putting superstars like Kobe and LeBron in Leonard's shadow with hot some spicy hot-takes.

But Leonard severely disappointed in Game 7 against the Denver Nuggets combining for only 24 points with Paul George to which Smith had a field day on Max Kellerman.

Oh noooo, @stephenasmith brought out the receipts this morning! 😲

"Kawhi Leonard, that might be the biggest choke job we've ever seen in NBA history." pic.twitter.com/jJEcRRaJSw

And fans really got their popcorn out for the show and absolutely loved it.

It’s midnight in Australia and I’m staying up for this!! Can’t wait!! pic.twitter.com/hYBkJ5BQJE

STEPHEN A. SMITH WITH THE RECEIPTS ON MAX KELLERMAN pic.twitter.com/w0DLZdut9l