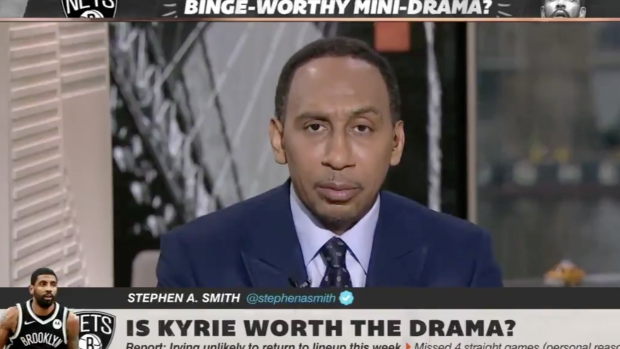 There's been a lot of drama in the NBA surrounding Kyrie Irving.

Earlier last month, Irving skipped out on his obligation of speaking to the Nets media, instead he left a statement with a Nets spokesperson who then passed it on to the media. Skipping the meeting IS a violation of league rules.

He was also burning sage in the opponent's home which some did find funny, others found disrespectful.

There's just a lot going on with surrounding him and the drama he's been bringing.

Irving hasn’t played a game since Jan. 5th, his absence was sited for “personal reasons” and is expected to continue for several more games while NBA looks into a recent video of Irving at a maskless birthday party.

Steven A. Smith weighed in on everything Kyrie Irving, summing it up in one sentence.

Comes as a shock to most as Stephen A. Smith was a supporter of Kyrie. Fans are teetering on the edge but seem to agree that if Irving isn't putting in the effort, it just might be time.

Wow, Stephen A was one of the few that defended Kyrie back then...