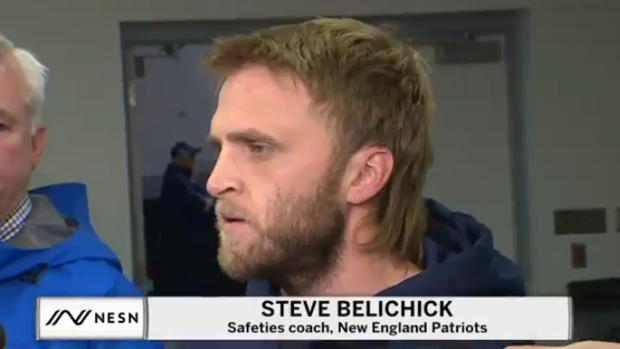 Bill Belichick is one of the greatest NFL coaches of all time, there is no denying that. He has a very particular way of going about things – he’s dry, he’s authoritative, and he just wants everyone to do their job.

There is no other coach quite like Belichick, but there’s one that is pretty darn close.

Steve Belichick first started making serious waves on Sunday night when the broadcast showed him on screen, rocking a wicked mullet and coaching the secondary unit.

Following the game, everyone wanted to get a word with the younger Belichick. As it turns out, the apple doesn’t fall far from the tree.

Much like Bill, Steve gave an interview that was so entertainingly boring that it’s impossible not to draw the comparison.

Watching this video of New England Patriots safeties coach and Bill Belichick’s son, Stephen Belichick, is mesmerizing on both an audible and visual level pic.twitter.com/RoyxoLNcf2

Bill? Is that you?

With the Bill Belichick era likely closer to its conclusion than its beginning, maybe the Pats have a new prodigy on their hands.