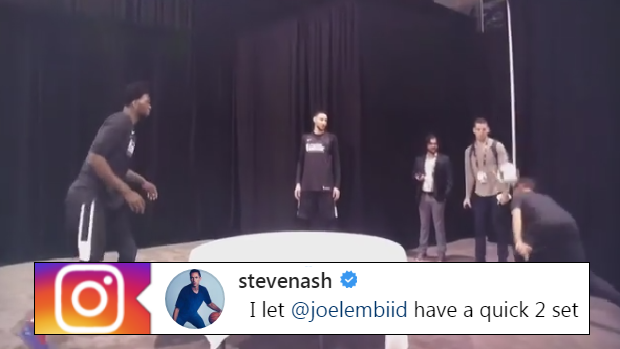 A former, and current NBA star battled it out in a unique game of ping pong ahead of the 2018 NBA All-Star Game.

Basketball Hall of Fame finalist Steve Nash is in attendance at tonight’s event and had the opportunity to go one-on-one with Philadelphia 76ers representative Joel Embiid. There was just one kicker. Rather than use rackets and a standard ping pong ball, the two used their feet, heads and a socker ball. After Nash gave Embiid an early two-set lead, he managed to storm a comeback over his opponent.

With @bensimmons as my witness I let @joelembiid have a quick 2 set lead in soccer ping pong before ripping it away for a 4 set to 2 win. Rematch Jojo?? #sickfeetforsevenfeet

Both players are known to be avid soccer fans. Embiid stated this past summer his belief that he would make the best pro soccer player in the NBA, and even showed off some of his skills on the pitch.

Nash’s love for the game is well known, as he even managed to incorporate the sport in the 2005 Dunk Contest when he delivered an alley-oop pass to former teammate Amar’e Stoudemire with his head.

One of the all-time best.

We’ve seen some interesting things during All-Star weekend, but none have been quite as unique as this. It’s always great to see stars, present and past, come together for these kind of moments.