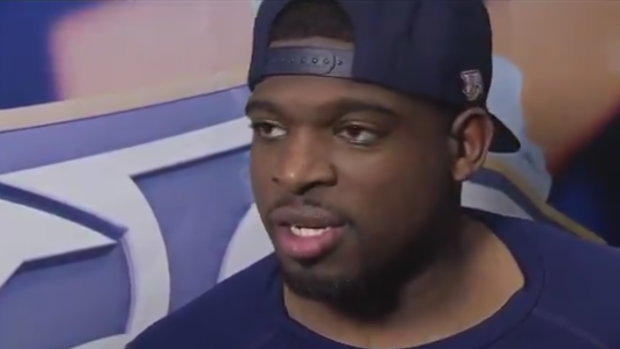 P.K. Subban may not have come up with Connor McDavid's nickname, but he sure knows when to use it during interviews.

Wednesday, following the Predators' 7-1 win over the Canucks, Subban was asked about how he was preparing for Nashville's game against the Oilers. Subban pointed out that despite the Oilers' slow start to the season, they're still a dangerous team. Subban also complimented Connor McDavid's game-changing ability, calling him by his ever-so popular nickname.

"If I wanted to do anything differently, it would've been to drop my gloves earlier" - #Preds @PKSubban1 addresses the dangerously high hit on Emelin in the third period and more in his postgame chat with @LyndsayRowley. #NSHvsVAN pic.twitter.com/jxUWTHRtQB

This isn't the first time Subban's called McDavid, 'McJesus.' Last year, after being asked how he was going to handle McDavid during the game, the Preds defenceman stated that "with the nickname like McJesus, you just try to contain him."

He's BAAACK! @asgrimson chats with @PKSubban1 down at the bench prior to #NSHvsEDM. Mr. Entertainment doesn't let us down, either! @PredsNHL pic.twitter.com/SRqWssbDBk

Despite having to play through illness, McDavid has managed to notch 39 points in 32 games this season, which is good for 3rd on the league leaders board. The Predators went on to defeat the Oilers 4-0.