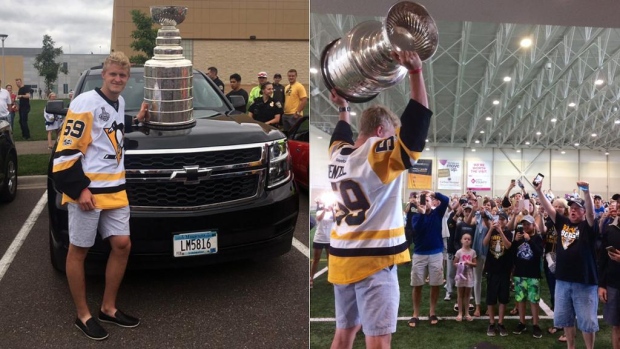 One of the biggest contributors of the Stanley Cup Playoffs for the Pittsburgh Penguins’ was rookie Jake Guentzel, who surprised a lot of people and turned heads on the way to a championship in his first year in the NHL. The 22-year-old showed zero nerves, and stepped up on the biggest stage of them all.

The youngster had his day with the Stanley Cup on Friday, and took it to his hometown of Woodbury, Minnesota where he brought it to the rink he grew up playing in, and then took it for a relaxing round of golf.

Snapshot(s) of Jake Guentzel's time with the Cup at the HealthEast Sports Center in Woodbury: pic.twitter.com/pwXsL4cTi6

Jake Guentzel of the @penguins brings the Stanley Cup to his hometown of Woodbury, MN. pic.twitter.com/xNy34wG3I1

AWESOME night @Jakenbake20 Guentzel sharing Cup w/ everyone! #OctagonFamily happy to be small part of it too! pic.twitter.com/tqCKlLcy1Y

Guentzel clearly had a fantastic day with the Cup…

What a day #Stanley thanks to everyone who made it special