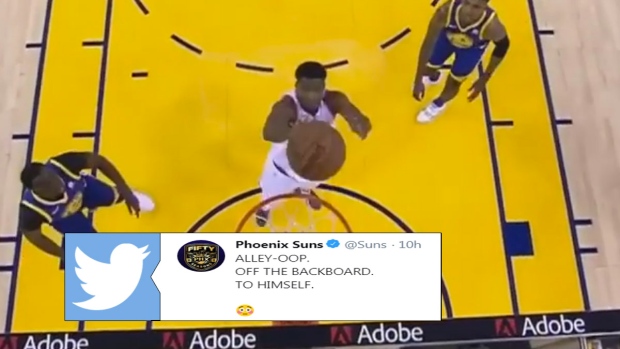 The Phoenix Suns ended the 2017 calendar year on a high note as they won five of the final eight games from December 16 to December 31, but once the calendar rolled over to 2018 things went downhill pretty quickly.

The youngest team in the NBA got 2018 started with a win over the Atlanta Hawks, but ever since then they’ve won just four games and are currently on a 15-game losing skid. However, since there hasn’t been much to play for this season the youngsters are just trying to have some fun at this point. On Sunday night, the Suns paid a visit to the Golden State Warriors and while there were plenty of superstars on the court, it was Suns guard Danuel House who led the way on the highlight reel.

Once Nick Young bit on the fake the soon-to-be 25-year-old got a clear path to the rim and took advantage of the situation by throwing down an alley-oop to himself off the backboard, leaving Draymond Green in shock.

The Houston, Texas native hasn’t seen much action on the court this season, but he put together his career-best performance on Sunday night finishing with 16 points, six rebounds, three assists and two blocks in just over 34 minutes of action.