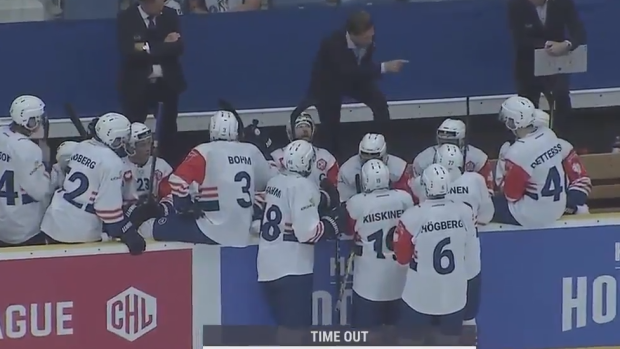 The Champions Hockey League is an annual tournament comprised of 32 of the best teams in Europe, similar to soccer’s version of the competition, with the group stage underway until early October. One of the teams featured is the Växjö Lakers, who finished first in the Swedish Elite League in the 2016/17 regular season.

Their head coach is Sam Hallam, who comes in as the youngest coach in the SHL at just 38-years-old. He was hired as the Lakers’ bench boss partway through the 2012-13 season, and is one of the more upfront coaches out there based on the way he motivates his team.

During a match on Thursday, Hallam was caught on a live broadcast feed of pronouncing a very, well, abnormal mid-game pep talk. Have a listen:

Sam Hallam, the Vaxjo head coach with some solid advice

Now, you’d suppose that when Hallam said “don’t get too horny,” he meant for his players to keep things simple out on the ice and not get too enthused with the puck. English wasn’t his first language after all, so perhaps his word selection was a little imaginative. We know coaches will try unorthodox methods to get through to their players, but this is definitely a new approach. One Laker is Vancouver Canucks first round pick in the 2017 NHL Draft, Elias Petterson. Petterson is just 18-years-old, so maybe coach Hallam thought this type of lexicon would resonate better with Petterson and some of the younger players? Who really knows.

This isn’t the first Hallam grazed the internet with one of his speeches. A few weeks back when Växjö played their first game of the tournament, the coach had a NSFW f-bomb laden rant after the team had blown a two-goal lead. Växjö didn’t allow another goal that game, and went on to win the game, so you could conceive that the message was understood by the Lakers.

Pettersson, drafted as a centreman, has looked good so far for the Lakers, having potted three points in three games, and has been moved to their top line playing on the left-wing under Hallam’s astute guidance.

(h/t to the Vancouver Courier)