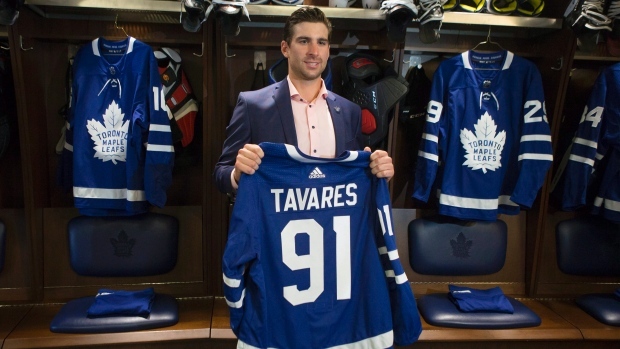 As the summer winds down and the hockey season heats up, the NHL Player Media Tour is underway in Chicago.

The star of this summer’s free agency blockbuster, John Tavares, is in the ranks of the players in attendance, and has expressed his excitement about starting the upcoming year in a new jersey for the first time ever.

But amid that excitement is obviously a little bit of apprehension. While Tavares joins a young and promising Maple Leafs team and a fan base that’s foaming at the mouth to see him at the Scotiabank Arena, the fans he’s leaving behind in New York aren’t nearly as enthusiastic.

In fact, some of them have been downright hostile.

Tavares eloquently addressed this hostility with the media today when he was asked about his return to the Island on February 28th and April 1st.

“I didn’t think everyone was going to love [the decision],” he admitted. “At the end of the day I did what I felt was best for myself and what I thought was right for me. As I tried to express in my [Players’ Tribune] letter back to a lot of Islander fans and the community and the organization there, was really how much they helped me grow up and be the player and person I am today. I wouldn’t be who I am now without that and how much I appreciated the support I got from the community and the Islander fan base and how well the organization treated me and how much fun I had there over the years”.

Even though we’re hoping Isles fans receive their former captain positively, we took a look on Twitter, and our expectations aren’t high.

I'll be stunned if he shows up. I'm expecting him to get the 24 hour flu.

You might want to grab a seat on the couch near the pool @91Tavares, I've got bad news. I'm "positive" your reception will be worthy of the snake you are #pajamaboy pic.twitter.com/gtRoMa9Ab5

Tavares went on to admit he did have one regret upon his departure.

“I wish I was able to do a better job and lead the team to more success. It’s something I’ll always have to look back on and wish I could have done more and did a better job leading the team. But we’ll see what happens. I hope it’s positive because I know the positive impact they all made on me.”