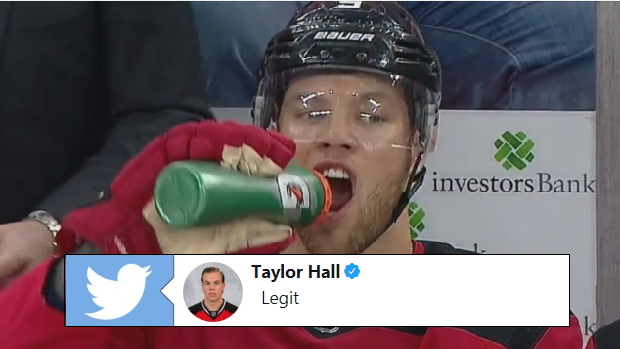 Taylor Hall listens to a Ric Flair speech on the jumbotron at the Prudential Center. , r/Hockey

The New Jersey Devils and New York Rangers met in a huge Metropolitan Division showdown tonight at the Prudential Center, as the Devils entered the contest with a narrow lead over the Rangers in the stnadings. While both teams were buzzing throughout the matchup, New Jersey forward Taylor Hall appeared to be the most energetic player from the bench, and the root of his excitement stemmed from listening to a speech from an old wrestling legend.

Tied at threes with 5:28 remaining in regulation, the Devils’ production team chose to play a sound bit by Ric Flair to pump up the crowd. Hall immediately took notice and couldn’t stop glaring at the jumbotron. With a smile on his face, he reenacted Flair’s infamous “woo!” and proceeded to repeatedly nudge teammate Miles Wood.

If Ric Flair can’t fire you up, then who can?

Flair was hospitalized earlier this year after suffering heart-related issues, but he’s managed to make a comeback and is still a prominent figure in pop-culture. The 68-year-old recently starred in Puerto Rican hip-hop artist Bad Bunny’s music video ‘Chambea’ and appeared as his energetic self. Whether it's in music videos or a hockey arena, the guy has a way of pumping up the audience.

I'm Backkkk! Thanks To Everyone For The Support These Past Couple Weeks. Just When You Thought You Could Count The Naitch Out.... Guess What? I Ain't Dead Yet Mother F**ckers! WOOOOO! @ricflairshop

Hall and the Devils eventually captured the matchup 4-3 in a shootout. The Calgary native’s attempt was stopped by Rangers goaltender Henrik Lundqvist, but he still managed to finish the game with a plus/minus +1 rating, five shots on goal, and an assist on Brian Boyle’s game-tying goal that sent the contest into overtime. Considering the team was able to come away with a victory, the production team should really consider playing more Flair on the big screen going forward.