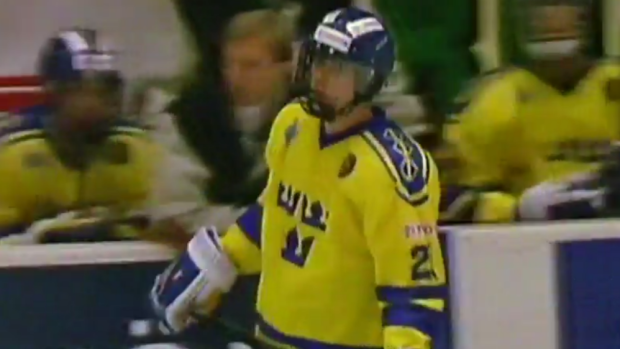 Christmas is days away, but hockey fans are probably more excited about the World Juniors being less than a week away, too.

The annual tournament that kicks off on Boxing Day across TSN brings people all over the world together during the holidays to cheer on their country in the hopes of the players bringing home a gold medal.

This year, Canada has a chance to win on home soil after a disappointing tournament last year, but the competition is tough as always, and with Team USA and Russia in the same group, nothing is guaranteed, but what is guaranteed is the fact the tournament should be incredibly exciting as always.

With the World Juniors coming up, and it being Thursday, we wanted to throw it back to the 1993 tournament in which Peter Forsberg dominated unlike any player ever has.

The 1993 tournament was in Sweden, and the host's had a ridiculously talented team that included Markus Naslund, Niklas Sundstrom and Forsberg.

The three played on the same line together and they all put up ridiculous numbers, but Forsberg overshadowed his teammates with a jaw dropping 31 points in just 7 games.

The 31 points is a tournament record that is still standing, and 24 of those points were assists, a tournament record as well.  While a 20-1 win over Japan certainly helped Forsberg and his line-mates rack up points, it doesn't take anything away from his incredible tournament as a whole.

Unfortunately his tournament ended with a silver medal as Canada took home gold.

Still, Forsberg was named a tournament All-Star, his record still stands alone, he was a huge part of the highest scoring line in World Juniors history, and he's the tournament's all-time points leader with 42.

The Swedish Sensation also went on to have a pretty good NHL and International career, too.

Will anyone ever come close to breaking Forsberg's record?  Let us know what you think and if any players will break it at this year's World Juniors, which start Boxing Day, across TSN.