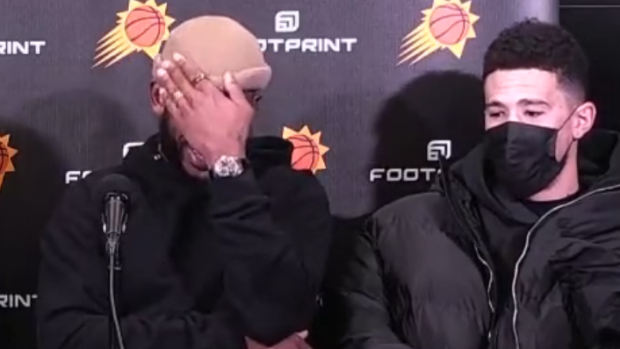 It’s safe to say the Toronto Raptors mascot picked up the slack with no Raptors fans allowed in attendance at Scotiabank Arena on Tuesday. With COVID-19 precautions keeping fans out of the stands, the Raptor did everything in his power to ensure his side still had a home court advantage.

We aren’t even talking about the gigantic blow-up version of himself, either. We’re talking about a moment towards the end of the game when Devin Booker was shooting free throws and apparently unable to tolerate the Raps’ mascot any longer.

After throwing his hands up in the air, Booker appears to try and laugh the situation off. In the Twitter Sphere, the damage was already done.
Regardless of what the particular beef was about, Booker seems to have squashed it. After the game, Booker explained that he and the Raps mascot had “hashed it out” and that they were cool again.

Booker’s teammates Jae Crowder and Chris Paul couldn’t help but laugh at the absurdity of it all.

"We hashed it out. We homies now." pic.twitter.com/OjZnhXSKpc