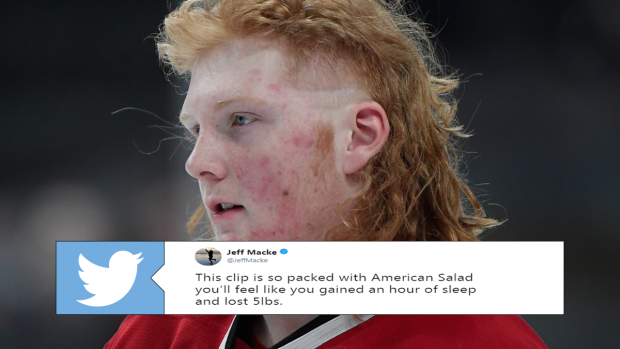 March Madness isn’t the only tournament that capitvates the sports world this month.

Down in Minny, the Minnesota State High School hockey tournament just wrapped up on Saturday night. The Minnetonka Skippers won the class “AA” division, while Orono Spartans won the class “A” tourney.

Every year, Minny native John King of Game On! Minnesota puts together an incredible montage of all the greasiest flows and heads of hockey hair. With the “The Tourney” finsihed for another season, we present to you, the 2019 Minnesota State High School All Hockey Hair Team.

Here’s some of our favourites, as well as some of the swaggiest player introductions.

Brady Anderson may have just won the tournament for Thief River #TheTourney18 pic.twitter.com/FIDRiPJyx1

Hide your Moms because Dallas Duckson is coming #TheTourney18 pic.twitter.com/osWvZrDlrF

Teddy Lagerback with the slowest skate out of all time. Head Coach holding in his laughter. Probably the funniest intro yet 😂 #TheTourney18 pic.twitter.com/zyZSsj2CZ3

Carter Wagner.. Business in the front, party in the back! #TheTourney18 pic.twitter.com/dNCrPqBFfx

Caleb Strong makes the camera man flinch and doesn't even crack a smile. May be the sneaky funniest intro of the day #TheTourney18 pic.twitter.com/6503mhUL1D

Not only do these players have some fantastic flow, but their names are pretty awesome, too.

Let us remind you that Canucks rookie sniper Brock Boeser is a Minnesota native, so it should come as no surprise why Brock's locks is considered some of the nicest flow in the NHL.

We can hardly wait for next year's tourney.