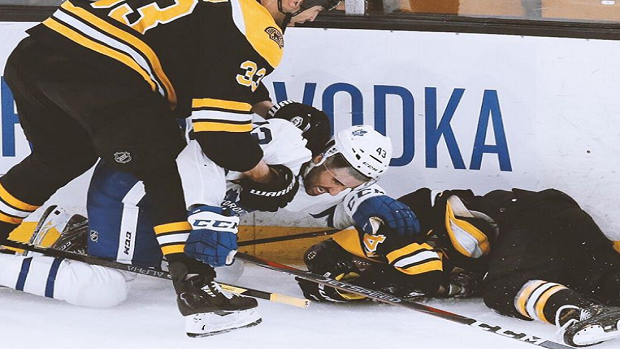 Some things will always be true.

This playoff season, though, this unavoidable anger towards the referees has been particularly bad, and fans are taking to Twitter to voice their displeasure into the void that is the internet.

In the past day or so, three game misconducts have been handed out. One to the Lightning's Nikita Kucherov, another to the Hurricanes' Micheal Ferland, and a third to the Leafs' Nazem Kadri.

In most (most) cases, it isn’t the actual calls that fans are up in arms about, but the lack thereof against the opposition. We could explain, but we’ll just let you take a look for yourself.

Ferland got tossed for that? Refs looking awful to start the playoffs.

It's one thing for @NHL refs to let some of the physical stuff go during the run of play, but how long are the fLAMES gonna be allowed to mug #Avs after the whistle with no repercussions? #GoAvsGo

A "Let's Go Lightning" chant sandwiched between boos and chants of "Ref You Suck" and all I can think of is....... #GoBolts #CBJ #TBLvsCBJ #NHL #NHLPlayoffs #BecauseItsTheCup pic.twitter.com/HhtST2VMYW

So if my Twitter tells me anything it's that those darned NHL referees are throwing every game to every team.

While fans are on a head hunt, or zebra hunt rather, coaches like Mike Babcock are insisting that the officiating shouldn’t be such a concern.

“The refs let lots of stuff go, but in the end, you can’t let that get in the way of what you’re doing. Playing in the Stanley Cup playoffs isn’t supposed to be easy.”https://t.co/yflKFy3ZIL #LeafsForever

Grandma Dubas (yes, that Dubas), however, is fuming, and took to Twitter to voice her anger at not only the officiating tonight, but also over some bad OHL calls that are apparently happening, too.

Ontario Hockey League. @OHLHockey, well the time has come,we had a good year,regarding officiating, so you waited till playoffs to send us a couple of "Duds" please don't let those two ruin any more game. Greyhounds versus Saginaw.

National Hockey League @NHL. Watching the Leafs and Bruins, did you borrow the Officials from the OHL. It sure looks that way. Shameful!

You know, people can blow smoke on Twitter all they want. But Grandma Dubas? We kind of trust her.