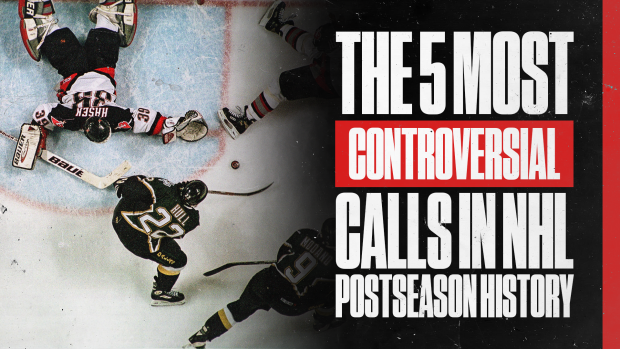 How could anyone forget these...

The 2022 Stanley Cup playoffs have featured some truly bizarre rulings. The Flames saw their season come to an end off of a head-scratching no-goal call on what appeared to be a clean goal off of Blake Coleman’s skate (which was ruled a kick), and just last night, Cale Makar scored a goal that looked to be offside (what are the rules even these days?).

So, these weird decisions got us thinking… what are the most controversial calls in NHL history? We’re not going to include any of the ones that have taken place this season, but here are five from the past that will forever hold a unique place in NHL history.

5) JOHN LECLAIR SCORES THROUGH THE NET

The Buffalo Sabres held a 1-0 lead in Game two of their first round series against the Philadelphia Flyers, until the unexpected happened. Flyers forward Joh  LeClair scored a goal THROUGH THE SIDE OF THE NET to tie the game. Philly ended up winning 2-1, and the series 4-1. Can you imagine if a goal like that possibly stood today? Crazy.

The New York Islanders kicked off their dynasty of the 80s with a goal that should not have counted. In Game 6 of the 1980 Stanley Cup Final, Clark Gillies’ drop-back pass to Butch Goring clearly left the zone, however… offside was not called on the play. Duane Sutter scored moments later and the Islanders ultimately won 5-4 in overtime.

Leafs fans will never let this one go. In Game 6 of their Conference Final series, Gilmour’s Leafs had Gretzky’s Kings on the brink of elimination, but the Great One kept his team alive after scoring an overtime game-winner to force Game 7. The kicker? Gretzky high-sticked Gilmour seconds before, leaving him bloodied on the ice. To this day, it remains one of the worst non-calls in NHL history.

Martin Gelinas scored two series-clinching overtime winners during the Flames’ magical 2004 run to the cup, and almost had a third to win it all. With Calgary and Tampa Bay tied at twos with just over seven minutes left, and the Flames holding a 3-2 series lead, a pass from Oleg Saprykin hit off of Gelinas’ skate and looked like it crossed the line before hitting Nikolai Khabibulin’s pad. Play continued and Martin St. Louis scored in overtime, forcing a Game 7 which T-Bay eventually won at home. Heartbreak for Flames fans.

1 ) BRETT HULL FOOT IN THE CREASE

Game Six. Triple overtime. The Dallas Stars are looking for their first Stanley Cup in franchise history. With his foot in the crease, Brett Hull scores the winner to send everyone watching into a complete frenzy. A rule was in place stating that a player could not score with his foot in the crease, however, according to The Hockey News, a private memo was sent out earlier that season, saying that a player could in fact be in the crease if they controlled the puck. Very confusing, but the call stood and Dallas hoisted Lord Stanley’s mug shortly after.

So… which of these do you think is the most controversial? Let us know @BarDown.