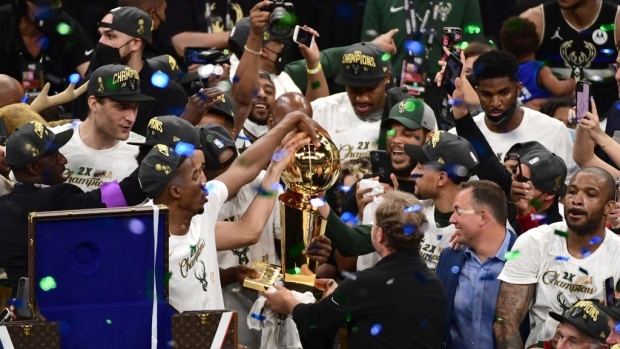 The Milwaukee Bucks are your 2021 NBA Champions!

The Milwaukee Bucks are your 2021 NBA Champions! 🤩🏆 pic.twitter.com/oalbq75CK2

After 50 years, the Bucks have won their second NBA title and how glorious it was to see not just the Bucks, but Giannis Antetokounmpo absolutely DOMINATE in Game 6.

We were on the edge of our seats right up until the very end when the final buzzer went to confirm the Bucks had done it.

And needless to say that Milwaukee was BUZZING, especially the Deer District where 65,000 fans gathered to watch and celebrate the Bucks dub.

The Deer District right before tip!

Giannis is the first player in NBA history to win:

Winning the 2021-21 Bill Russell MVP, Giannis had a career night, putting up 50 points in the biggest game of his career.

Giannis is also the first player in NBA history to average 30/10/5/1/1 on 50% shooting in a single playoffs. pic.twitter.com/WOzr1JviTj

Giannis is the first player in NBA history to win:

The post-game celebration was just as amazing with some incredible moments.

Giannis talking to his trophies 🤣 pic.twitter.com/7zDvdYXQ5U

Bobby Portis is a bigtime fan favourite in Milwaukee. 🙌

Though one of the best parts of the Bucks winning is that both Giannis and Thanasis can join Kostas with their NBA rings, becoming the first trio of brothers to win NBA Titles.

Giannis and Thanasis can celebrate with Kostas at the dinner table now 😂 pic.twitter.com/WKI38m7w8F

Many members across the league took to social media to congratulate the Bucks on their incredible feat.

Well deserved 🏆 Congratulations to @Giannis_An34 and the @Bucks

Nothing but respect for the Milwaukee Bucks franchise, the city of Milwaukee and those loud ass fans. Incredible playoff run fellas!

Man, what a way to end the season.