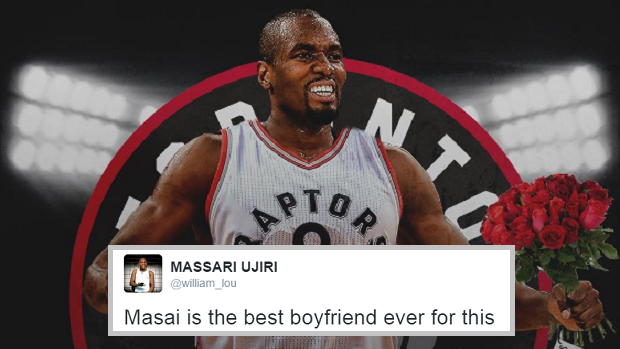 For the past couple weeks the Raptors’ season has been in a downward spiral.

Last game, the Raptors blew a 16-point lead to the Detroit Pistons and ended up losing by a single point – their sixth loss in their last 10 games. After the game, star players Kyle Lowry and DeMar DeRozan were pretty emotional and made strong statements about the urgency with which something needed to change.

After emotional responses to the Raptors loss last night, the Raptors spoke to the media again today. Visit TSN.ca to hear more.

Adrian Wojnarowski of Yahoo’s the Vertical reported that the Raptors traded a 2017 1st Round Pick and Terrence Ross to the Magic for Serge Ibaka. Obvioulsy, this is a pretty big upgrade for the Raptors who have struggled at their start four spot for a long time.

With the increased optimism of the fan base, media reacting to the blockbuster and players saying goodbye, there was a lot that happened online.

I guessed wrong! Wow that wasn't a lot to give up... were there any other bidders? Guessing no. https://t.co/JhhwJsfTL4

Watched you grow from a young ROOK , to a young vet!! Keep growing T!! Love you man!! #toughbusiness

Raptors finally get their power forward in Serge Ibaka, who they have targeted for weeks.Raps star trio of Ibaka-DeRozan-Lowry very powerful

One more thing: I can't see the Raptors making this deal unless they got some kind of assurance Ibaka (a UFA this summer) will re-sign

Ibaka gets to play the same role he played with the Thunder, complimenting 2 scoring-ball dominant stars. So pumped about this trade pic.twitter.com/EuwShUcbmI

Will always be a lot of "what ifs" w/Terrance Ross. So talented. Pretty excited to see what Norm Powell can do with the extra min #raptors

Sneaky outcome of Toronto dealing for Ibaka: Boston controls the trade market now, only top-12 team with assets/cap space to make any trade.

Confirming: Terrence Ross and a lesser first-rounder for Serge Ibaka. Get ready for more Norm, and a stretch four.

Even figuring conservatively, TOR potentially looking at $130M+ payroll next season--well over tax. Either something gives, or MLSE pays up.