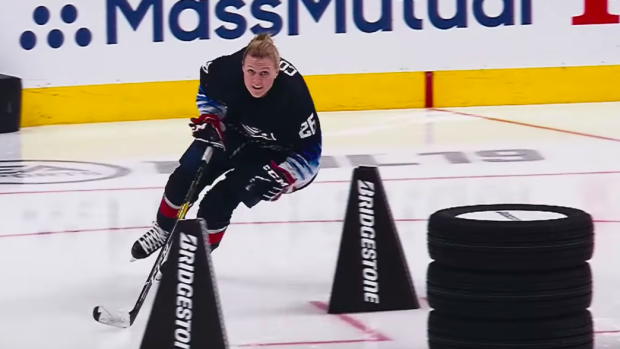 Last year, Kendall Coyne Schofield made waves around the hockey world with her inclusion in the NHL’s Fastest Skater event at All-Star weekend, finishing faster than Clayton Keller and within a second of Connor McDavid. This year, she’s participating in a 3-on-3 women’s game to be held at All-Star.

It’s clear that what motivates her is to be a role model for the next generation of hockey players, particularly young girls. The Chicago Blackhawks, who have close ties with Coyne Schofield as a Chicago native, tell her story in depth with a new video feature that can be seen on the Blackhawks website.

A year in the making by @NHLBlackhawks, highlighting my lifetime journey in the game of hockey and breaking down barriers along the way. Watch “As Fast as Her” on https://t.co/8DnIQmfSoi #AsFastAsHer #NotDoneYet pic.twitter.com/rvMJVuEFWD

The women's game has taken on a new level of prominence over the last little while, due in no small part to the work of the players who have advocated on their own behalf. Coyne Schofield is one of 200 players participating in a boycott of North American women's hockey leagues, hoping to establish a more viable options for players now as well as for future generations.

Around the hockey world, Coyne Schofield’s peers voiced their support for her and her message.

If you only knew that she is an even better person than a hockey player.....which is saying a LOT! We will never be as fast as @KendallCoyne but she sure makes us try to be! https://t.co/KHPcfics7m

When I congratulated Kendall after the skills competition last year her first response was wishing we all would have been there, her second was about about pushing our sport forward. This is who she is. @KendallCoyne thank you for always being you https://t.co/VfJidYlO5m

So proud of you @KendallCoyne :) This is what it’s all about. Real. True. Inspiring. #chills https://t.co/nx8R8ACuz3

For someone who has never been the tallest player, she’s always had everyone looking up to her. Thank you @NHLBlackhawks for sharing the power in sport & the power in @KendallCoyne - I also wish I could be as fast as her. https://t.co/f3t7Mu01Qt