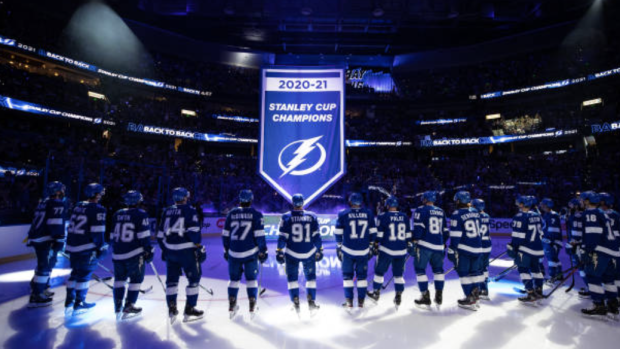 The Tampa Bay Lightning put the cherry on top of their 2021 Stanley Cup championship when they kicked off the season at home against the Pittsburgh Penguins on Tuesday.

Prior to puck drop, the Bolts’ raised ANOTHER banner to the rafters of Amalie Arena.

Well maybe not so much for one Lightning player. Former Canadiens player Corey Perry joined the Lightning this past off-season after getting his dreams crushed in the Stanley Cup Final. Watching the Championship banner being raised was probably not the best reminder of the loss and NHL fans agree.

Corey Perry going to sit on the bench while the Lightning raise the cup banner pic.twitter.com/sSMAuOFBzz

Can somebody check on Perry, please?