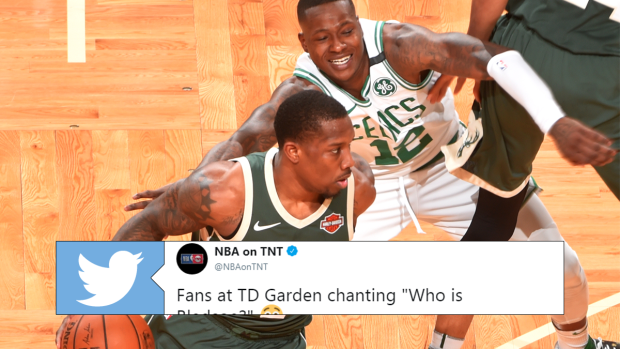 Throughout their first round playoff series against each other, there has been quite the spat between opposing point guards Terry Rozier of the Boston Celtics and Eric Bledsoe of the Milwaukee Bucks.

After Game 1, Rozier referred to Bledsoe as “Drew Bledsoe,” seemingly by accident. This prompted Bledsoe to respond after Game 2 by saying that he didn’t know “who the (expletive)” Rozier was, which, you know, seems unlikely given all of the scouting and preparation that goes into a playoff series. Anyway.

During Saturday’s Game 7, the Boston home crowd add fuel to the fire by chanting “Who is Bledsoe?” every time the Bucks point guard touched the ball:

Fans at TD Garden chanting "Who is Bledsoe?" 😳#NBAPlayoffs pic.twitter.com/4xjPuAOWMb

Even better, the Celtics’ game op crew had a surprise in store. They brought in the real Drew Bledsoe, who happens to be a former quarterback for the nearby New England Patriots, for a quick in-game video:

This is a master class in throwing shade. On top of everything else, Rozier wound up with the last laugh when he led the Celtics with a team-high 26 points in the Celtics’ runaway 112-96 win to determine the series. Many of those points came at the expense of Bledsoe’s defense, too.

That said, this story has a happy ending between the two!

Predictably, that isn’t stopping anyone from getting their jokes off.

T Ro emptying rounds in to bledsoes carcass like its Goldeneye

How cute is Terry Rozier with his son 😍 pic.twitter.com/0ENIRPCkOa

When you finally realize his name is Terry Rozier III pic.twitter.com/02DT4SLIVx

eric bledsoe deserves every single drop of the savagery boston is pouring all over him. all of it. rozier has outplayed him by miles in every way. he's never going to forget his name; it's cost him millions of dollars on his next contract.

Maybe Eric Bledsoe wasn’t kidding when he said he didn’t know who tf Terry Rozier was. Cause he damn sure can’t find him on defense.

Eric Bledsoe when reporters ask him about Terry Rozier after the game pic.twitter.com/hKgO96ejjs

If I'm Rozier I'm getting a shirt made with Bledsoe's face on a milk carton.

I love that they keep showing closeups of Eric Bledsoe every time Rozier does anything. 🤣🤣🤣