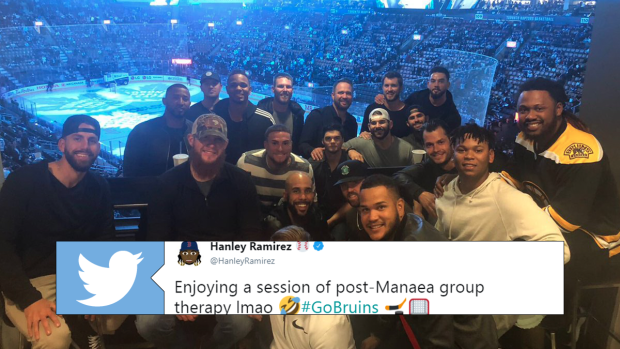 With a rare day off in baseball, how did the Boston Red Sox decide to spend their day off while in Toronto for their upcoming series against the Blue Jays? Nothing sounds better than a team outing to take in Game 6 between the Toronto Maple Leafs and Boston Bruins, of course.

As shared by Hanley Ramirez, the team was able to enjoy a relaxing night out after getting thoroughly victimized in the no-hitter pitched by Oakland’s Sean Manaea on Saturday:

Hanley knows that it’s important to treat yourself 💅 https://t.co/HQCNqUSFiB

One hawk-eyed fan also noticed this interaction on TV, which seemed to capture two members of the Red Sox offering ice cream bars to teammates simultaneously, while Eduardo Núñez quietly goes to town on one on his lonesome.

It sure would’ve been a nice night out for the Red Sox if only the Bruins were able to win and move on to the second round, but oops -- things didn’t work out that way! Maybe the Leafs should find a way to ensure that Red Sox are watching again when they play their Game 7 on Wednesday.

The Red Sox and Blue Jays will begin their series under warmer conditions on Tuesday, after falling ice from the CN Tower punctured a hole in the Rogers Centre literally a week ago.