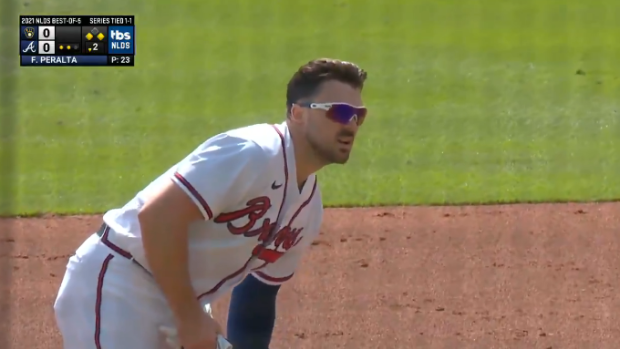 Baserunning can be trickier than it seems at times. While there are only so many situations that can happen in baseball, baserunning is all about reading plays and reacting in split seconds, and you’ll occasionally see blunders take place as a result.

Even by baserunning blooper standards, this one is pretty bad.

The culprit was Atlanta Braves outfielder Adam Duvall, and the crime was straight up costing the Braves a run during NLDS action. With runners on the corners, Travis d’Arnaud stepped to the plate trying to hit a ball high and deep. He did just that, which should have easily cashed in Austin Riley from 3rd.

Riley crossed the plate with no issue, but the run was not to be. It turns out Duvall had also decided to tag up from 1st, and was subsequently thrown out at 2nd base before Riley could cross home.

What a BRUTAL base-running mistake!!

It's likely that Duvall assumed the throw would go to home plate, in which case he could take advantage of the extra time to tag up and reach 2nd. Instead, the throw went to 2nd and was waiting upon his arrival.

You can see Duvall react immediately to the blunder. There’s no excuse for that kind of mistake in judgement.

#Braves usually can't hit come time for the postseason, But they have now found more ways to choke. Why does my team do me like this? https://t.co/3mZSqp9wNI

This blooper kept the game tied 0-0, but luckily for Braves (and particularly for Duvall) the Brewers were unable to get anything going on offence. Atlanta would end up winning 3-0 to take a 2-1 series lead.