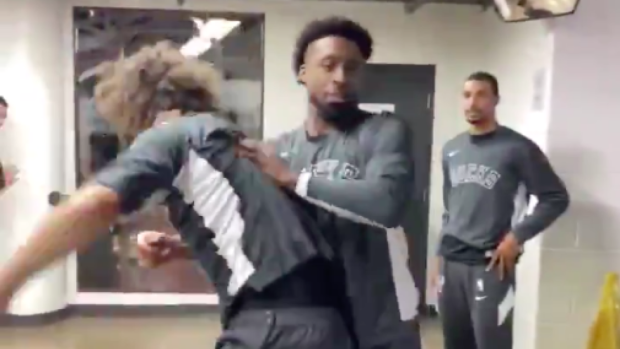 Before the Bucks played their Monday night game against the Bulls, Wes Matthews and Robin Lopez decided to do something a bit different to get the adrenaline flowing pregame.

Look, anyone who has ever fake-wrestled their siblings kids growing up watching RAW knows that the WWE specifically advises *not* to do this, so we can’t imagine that it’s any better between two professional basketball players who are literally about to play a game.

A ‘DNP-Rock Bottomed by Wes Matthews in the locker room tunnel’ wouldn’t look great on the box score, is all we’re saying.

BAH GAWD, ROBIN LOPEZ HAS A FAMILY! His brother, Brook Lopez, is literally his teammate on the Bucks. And Wes Matthews just broke him in half.

Can we get a tag-team match going on with Wes and Robin against Chuck and Shaq? Will the AEW facilitate this or what?