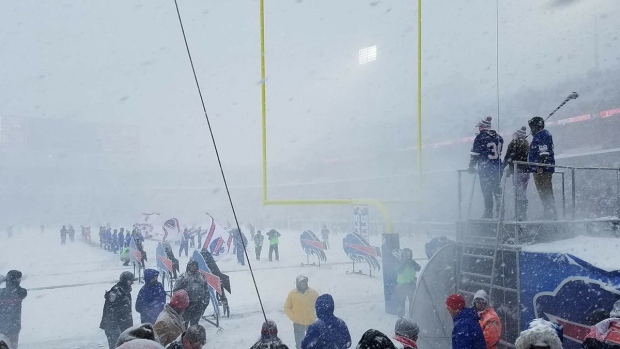 It’s the most wonderful time of the year.

Inspired by the snowy Grey Cup, the climate in Buffalo decided that Sunday, December 10th, 2017 was day for the first official snow game of the 2017 season, as the Bills and Colts square off from New Era Field in Orchard Park, New York.

Earlier this week, we featured some of the ridiculously cheap ticket prices being sold on secondary markets, with some going as low as $4 USD. One of the main reasons why tickets were so cheap was because the weather was expected to be cold with snow in the forecast, and boy oh boy was the weather man right.

The scoreboard at far end is no longer visible. Worst I’ve seen it here that I can recall. pic.twitter.com/KlKRrXK0DG

Retweet if you’re not in Buffalo today.
🙏 pic.twitter.com/QbxAQml09x

People are literally trying to dig out their seats here at New Era Field. #Bills pic.twitter.com/E0ObnNhmi8

These refs have absolutely no idea where that ball went pic.twitter.com/r7n1oHZla4

Winter is here in Buffalo. pic.twitter.com/JhobGfcbtp

Naturally, Bills mafia was having fun out in the snow. Warning, the following videos are NSFW.

#BillsMafia is done with tables. Now they are using grills pic.twitter.com/MEJbB6oyic

Looks like he’s having the time of his life #BillsMafia pic.twitter.com/Th6lQYJ5hl

Just another day in paradise.